Every year, a group of prestigious interior designers are selected to transform a luxury Manhattan townhouse into an exhibition of fine furnishings, art, and technology for a good cause. This year, AKDO is a proud sponsor of the Show House, and will be featured in a number of rooms designed by different designers; all of whom have unique, trademark styles. The exhibition is known for sparking interior design trends globally; read on to discover some of this year’s striking spaces.

An American Classic – Esteemed designer, Mark D. Sikes, is known for his timeless interiors that strike the perfect balance between American and European, as well as old and new aesthetics. In this year’s Kips Bay Decorator Show House, he chose to outfit the floor of a well-appointed bath in AKDO’s Carrara Basketweave mosaic with Turkish Gray Dots. The traditional look of the mosaic, which intertwines white and gray marble tesserae to mimic a fabric pattern, perfectly complements the space’s existing historic marble tiles, allowing the crisp blue and white paisley textiles used throughout space to add a layered, charming effect. 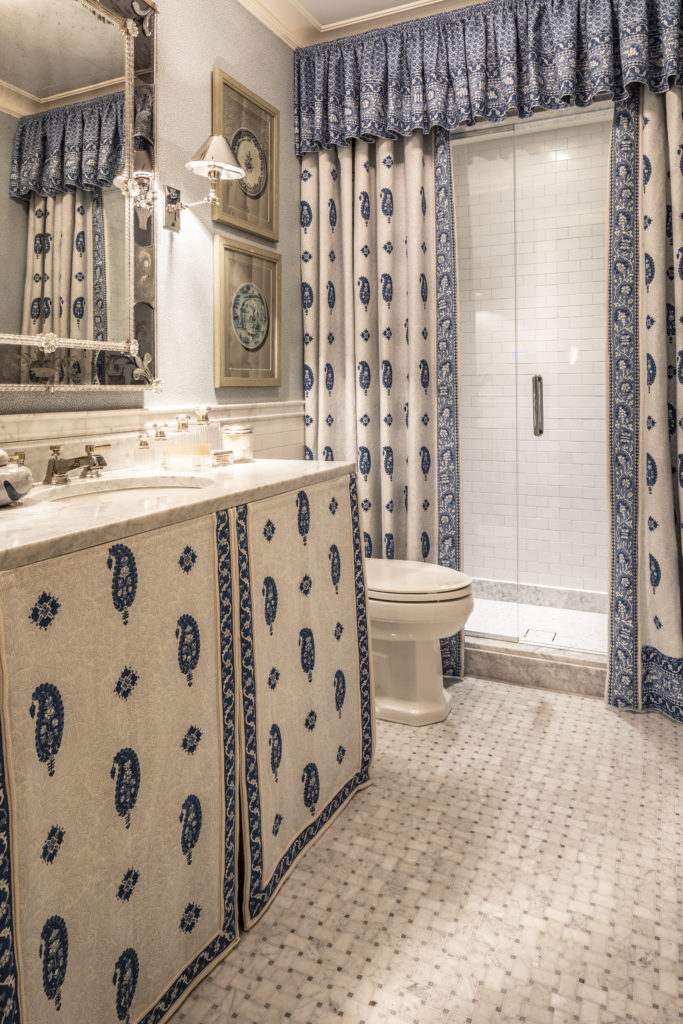 The Art of Living Well – In this year’s Kips Bay Decorator Show House, the top floor of the home provided veteran designer, Charles Pavarini III, with the opportunity to create an oasis within the space. The designer, who is known throughout the industry for his attention to detail and ability to produce architecturally-inspired spaces, crafted a unique wellness retreat that flows seamlessly with the adjacent rooftop terrace. One way that Charles accomplished this cohesion was by utilizing AKDO’s Kaya Collection mosaics both indoors and outdoors; Kaya Kavara Brown was used as a backsplash for the juice bar, and a custom 2 cm-thick Kaya Aupala Brown mosaic, made especially to withstand the elements, surrounds the terrace fountain. To add further interest, and reflect the natural light pouring in from the terrace door, Charles also opted to use AKDO’s metal Excalibur Armor Knight mosaic as a feature wall, which acts to define the space behind the massage table. At once, the resulting space is rich with depth and offers its inhabitants an unmatched serenity. 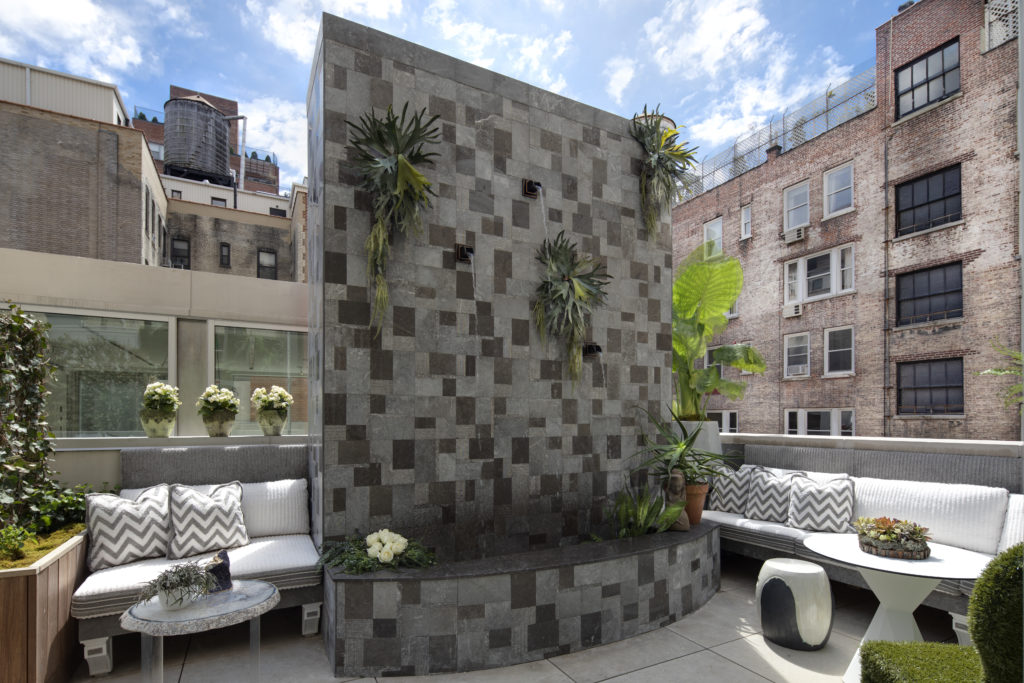 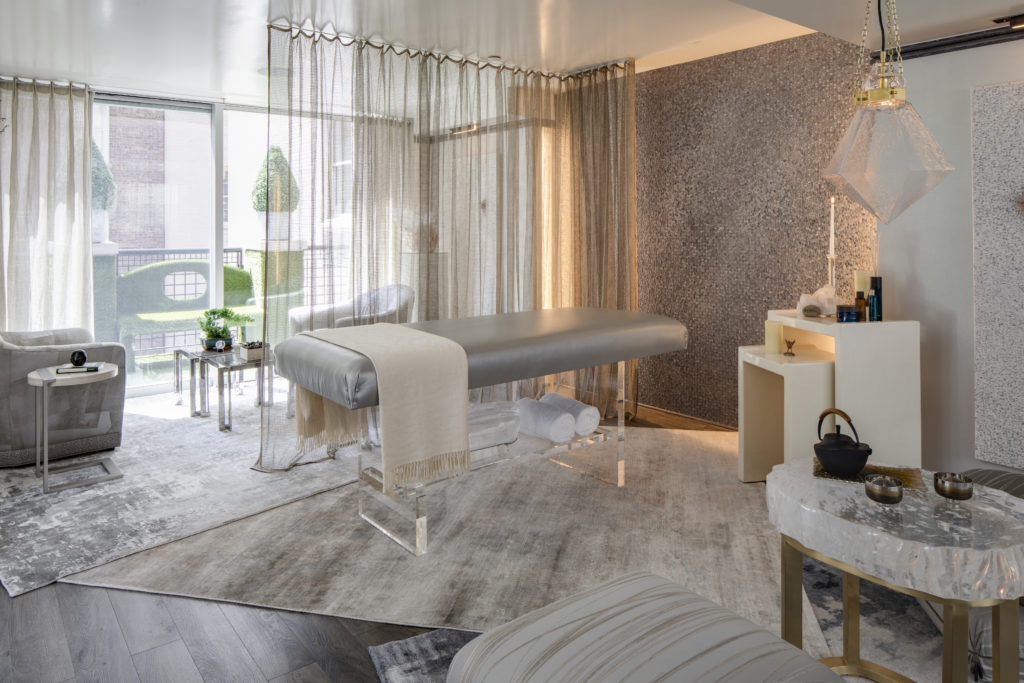 Style Meets Substance – With his trademark sensibly stylish approach to design, Wesley Moon has decorated a multitude of spaces to suit his client’s needs while elevating them to his high aesthetic standards. In this year’s Kips Bay Decorator Show House, Wesley created a striking kitchen space with crisp white cabinetry and AKDO’s Beam Calacatta mosaic as the floorcovering of choice. A part of AKDO’s Luminous Collection, Beam lends the space a modern take on traditional style thanks to its crisp lines that boast the ability to be rearranged as the mood strikes, for an inimitably personal look. 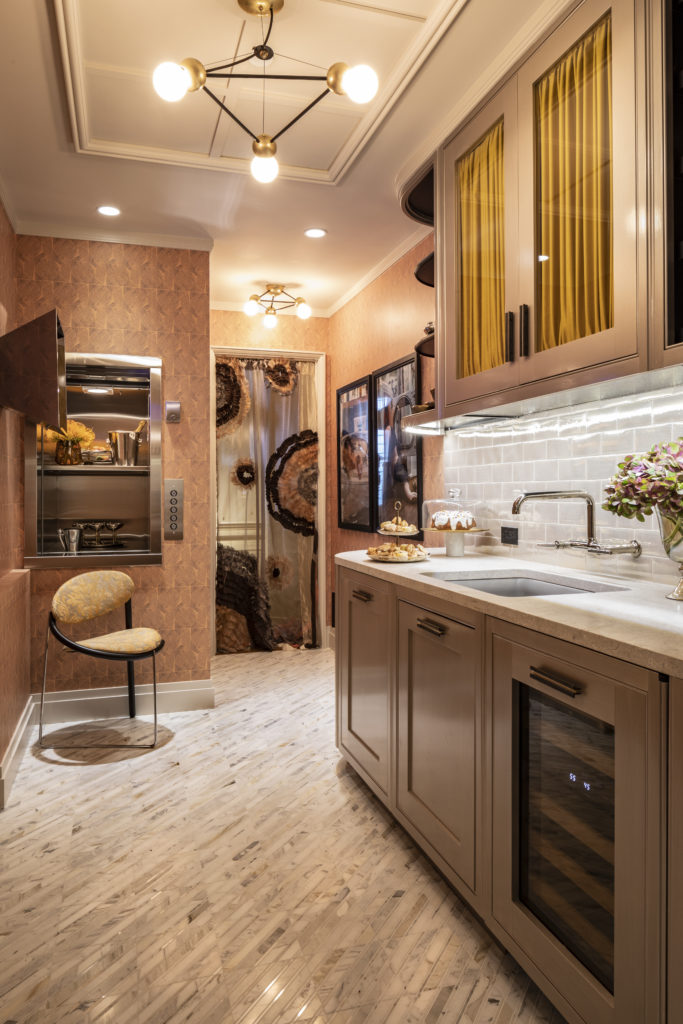 Reflection of Style – As a designer, Clive Christian is passionate about transforming predictable spaces into extraordinary interiors by utilizing one-of-a-kind elements throughout. In this year’s Kips Bay Decorator Show House, Clive created a kitchen whose style remains true to these characteristics, with rich wood cabinetry, aqua blue accents, and a modern backsplash courtesy of AKDO’s Molten Chrome tiles. The Molten collection modernizes the classic subway tile with arresting metallics in both shiny and brushed finishes. Here, by installing both finishes in an alternating pattern, the designer created a real focal point surrounding the backsplash and adjacent bespoke cabinetry.

The Show House will open on May 1st and remain open until May 31st.