In 2015, AKDO introduced Origami. Bold, unexpected, graphic and distinctive, the natural stone mosaic line took America by storm. In its debut at the Kips Bay Decorator Showhouse, juxtaposed with the traditional look of a clawfoot tub, Origami made a statement of modernity, timelessness and drama. That was in May. 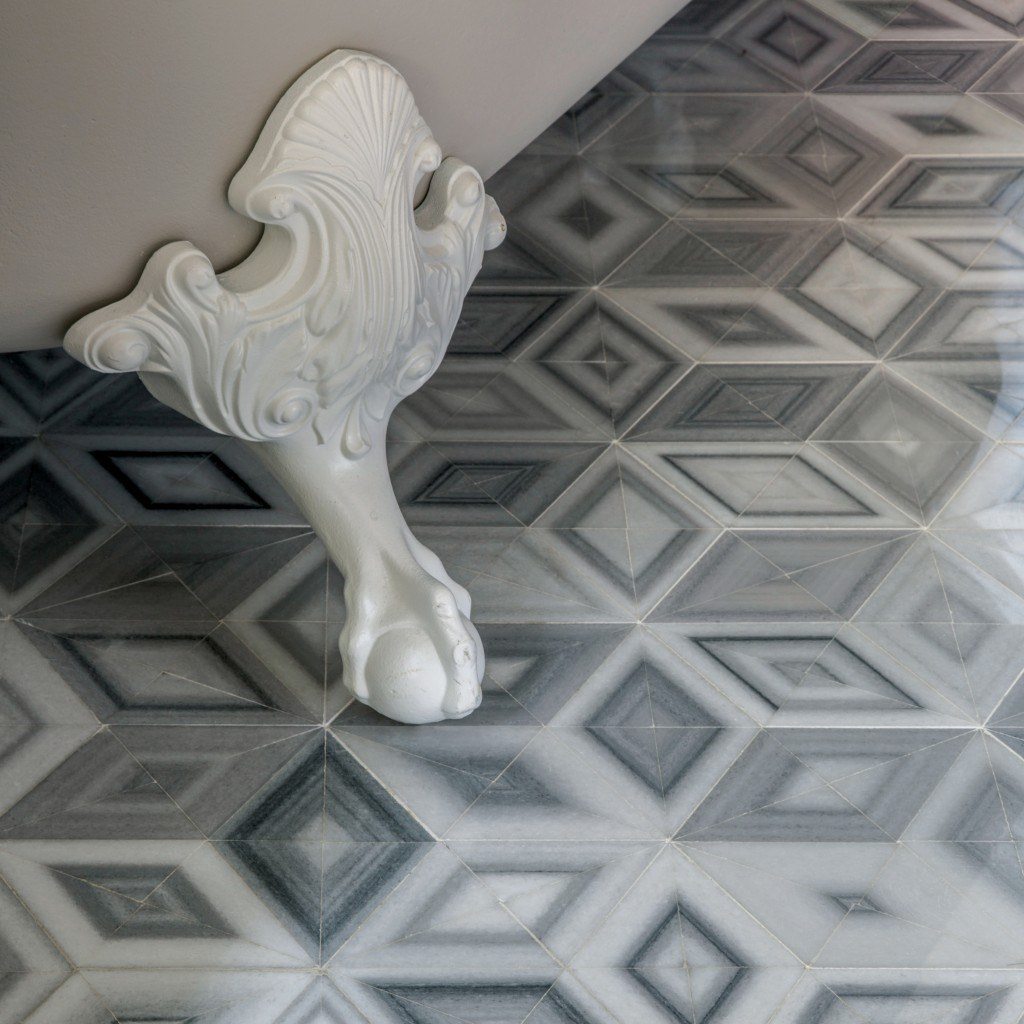 By December, the collection had been rolled out nationwide to an enthusiastic reception, appeared in major shelter publications and its debut year culminated in its recognition as an honoree in the Interior Design Best of Year awards.

Origami is marble, expertly cut so that the veining on each piece aligns perfectly to create a mesmerizing folding illusion. Taking inspiration from the ancient Japanese art form of paper folding and the 3-D shapes it produces, AKDO’s Origami collection fuses geometry and nature.

Mesmerizing chevron, hexagon and block mosaics in the Origami line are made from luxury marbles with soothing color and lively motion. These cool gray and soft brown marbles are expertly cut allowing the veining on each stone piece to perfectly line up with others in the mosaic creating a folding illusion. The linear movement seen in the stones and the interesting interlocking shaped mosaics make for a mesmerizing design. There are eight patterns and four types of natural stone. 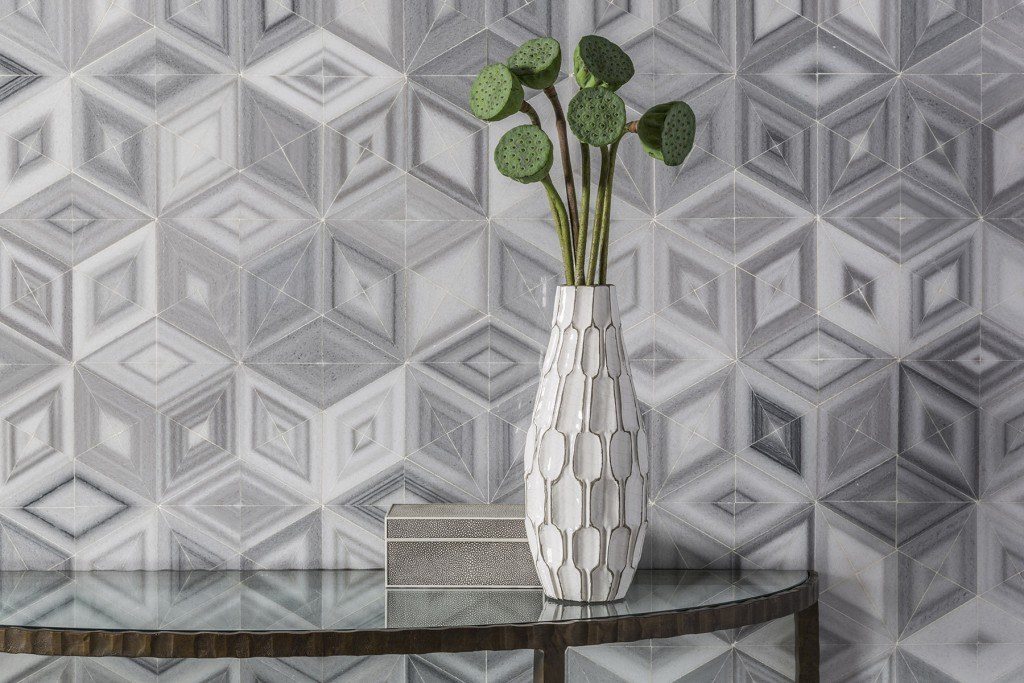 SETSUMI comes in a large size and a smaller, mosaic size, both in Zebra. It has an Escher-esque quality, appearing to the eye variously as cubes, hexagons, or as kaleidoscopic bursts of diamond shapes. Zebra stone has naturally occurring straight, parallel veining that adds drama and a spectacular three-dimensional look to the patterning. 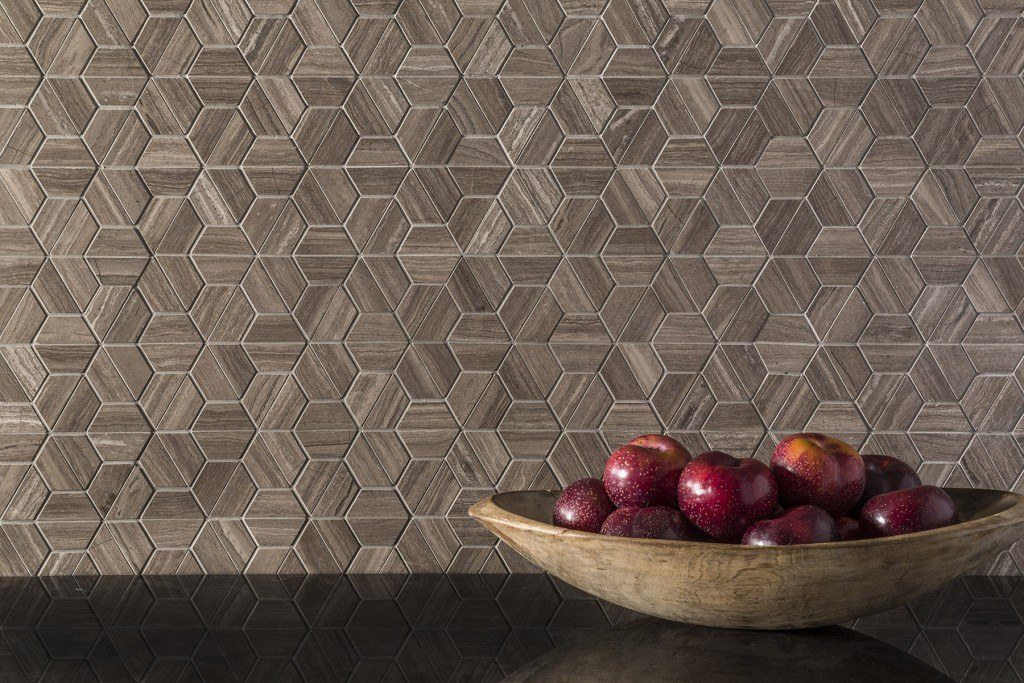 HOSHI’s split hexagons form a compelling honeycomb, but blink and you may see diamonds, triangles or larger hexagons. In the warm stones, this mosaic can resemble a classic wood parquet, and in the cool tones it has a decidedly modern edge. 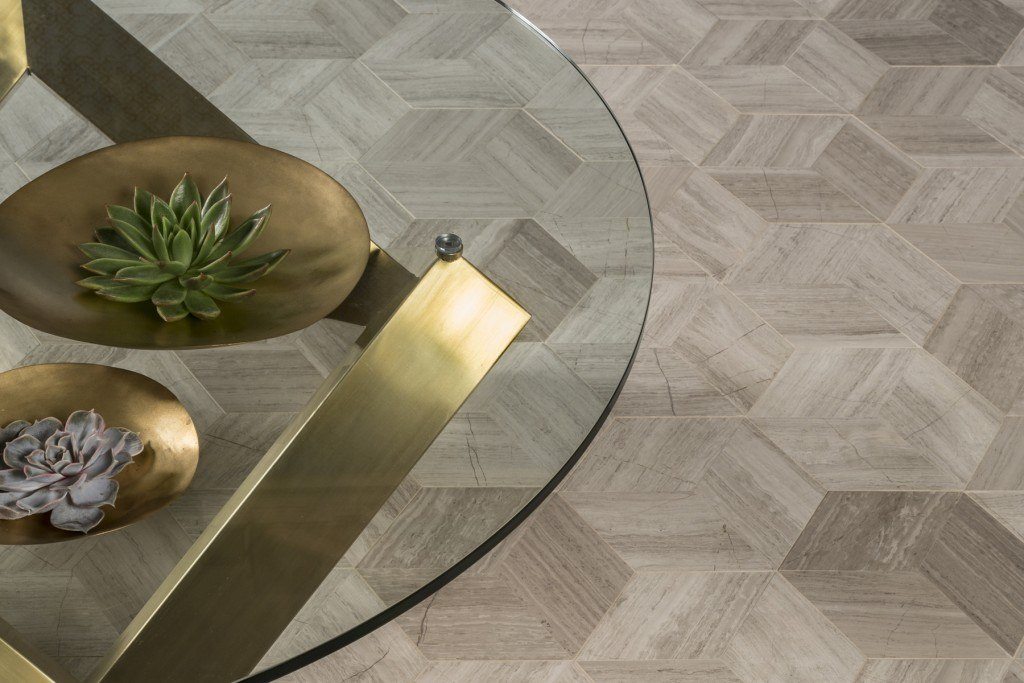 Aligning the straight, parallel veining of the marble by meticulously cutting and fitting each piece in opposite directions, AKDO’s mosaic artisans are able to create the illusion of a dimensional, folded box within each hexagon of BUROKKU. This ancient trompe l’oeil pattern typically achieves the faux-third-dimension through the use of contrasting colors, but here the stone’s natural texture does the trick. 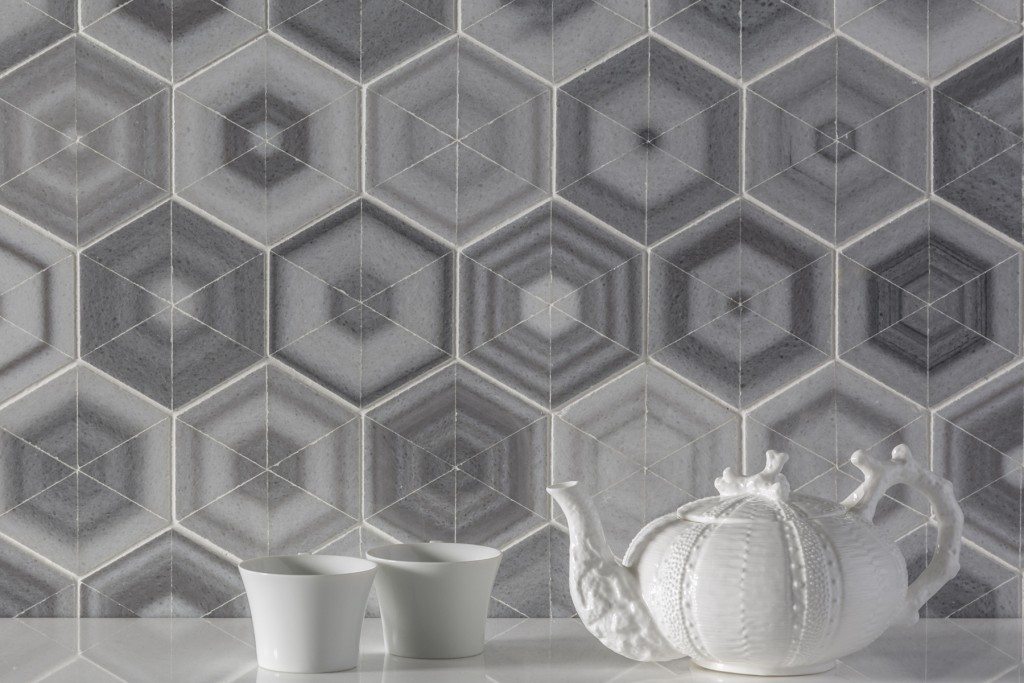 Kiki’s small hexagons are made up of six triangles each. This pattern reminds us of our childhood kaleidoscope view, but in a very grown-up charcoal and white Zebra stone. It also looks great in the other three stones. 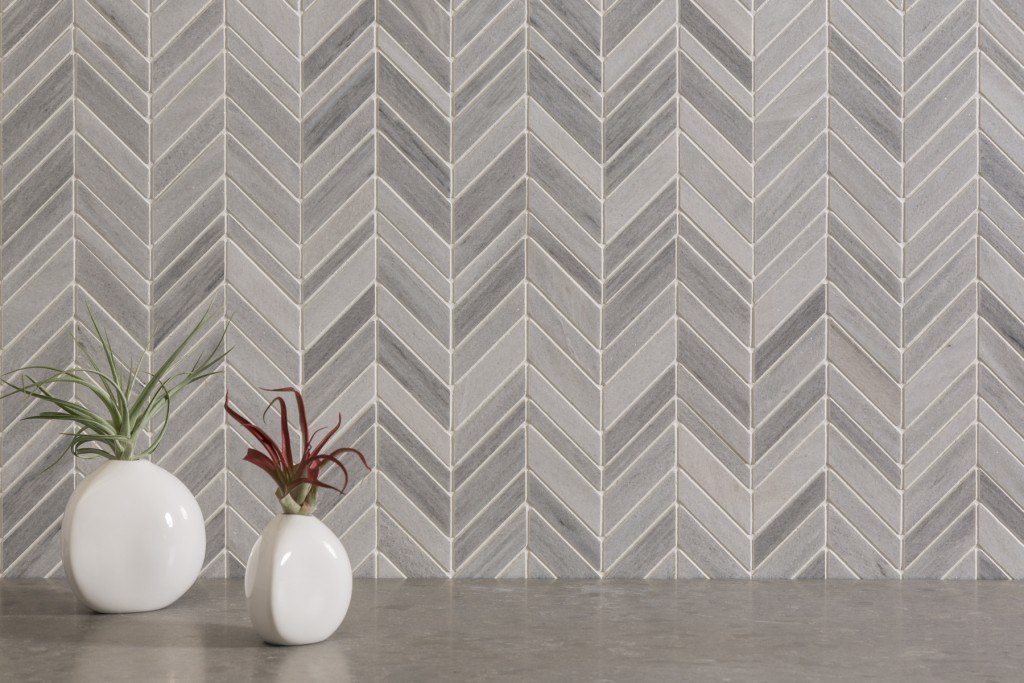 NAMI, an irregular-width chevron pattern, looks as if it has folding peaks and valleys where the chevrons meet, like a paper fan. It is offered in all four stone colors. 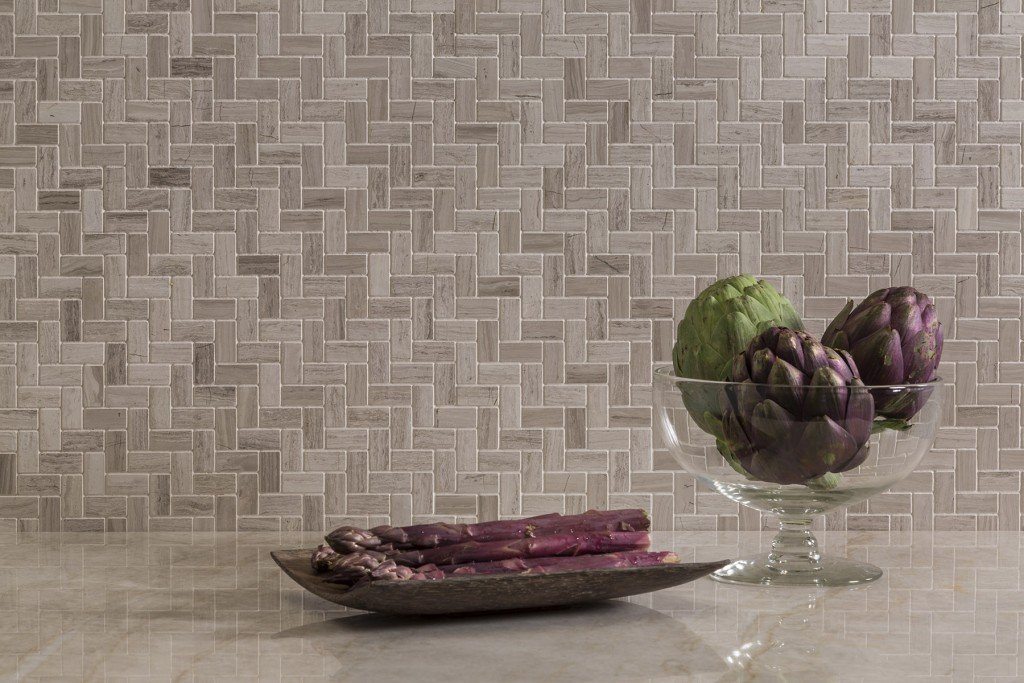 Sukoshi mosaic is perhaps the most traditional of the Origami line, yet its 2:1 ratio brick shapes turned alternately sideways and vertically take full advantage of the drama offered by these straight-veined stones to create added drama and a touch of surprise. This pattern is great for transitional decor. 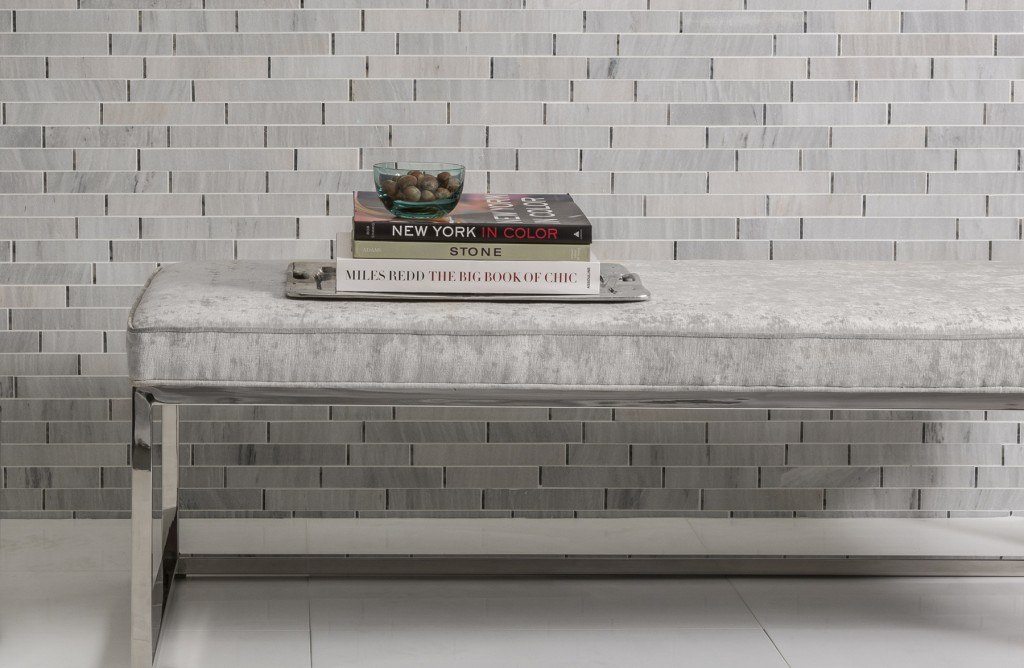 Suitable for floor or wall applications, ORIGAMI tiles and mosaics are designed to add a wow-factor to residential, hospitality or commercial interiors.

Where to find Origami:

As with all AKDO products, they are offered through our New York flagship showroom at 22 West 21st Street and through fine kitchen, bath and tile showrooms nationwide. Find one near you.

Glossary of Origami Shapes in Each Color of Stone: 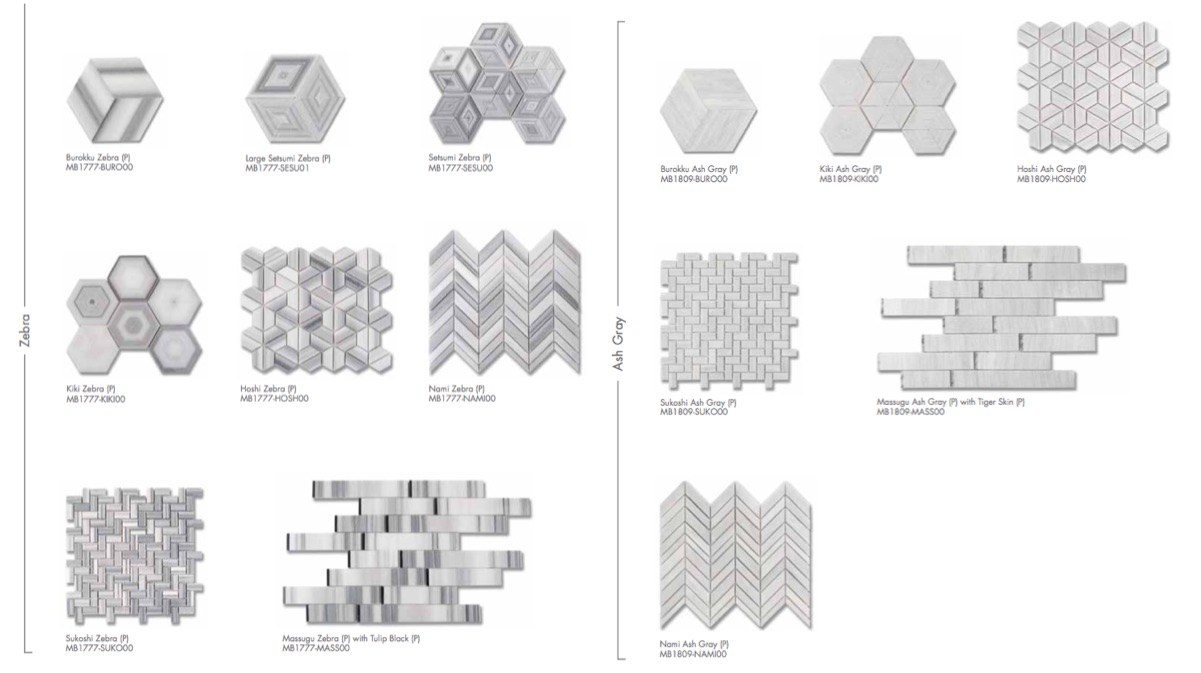 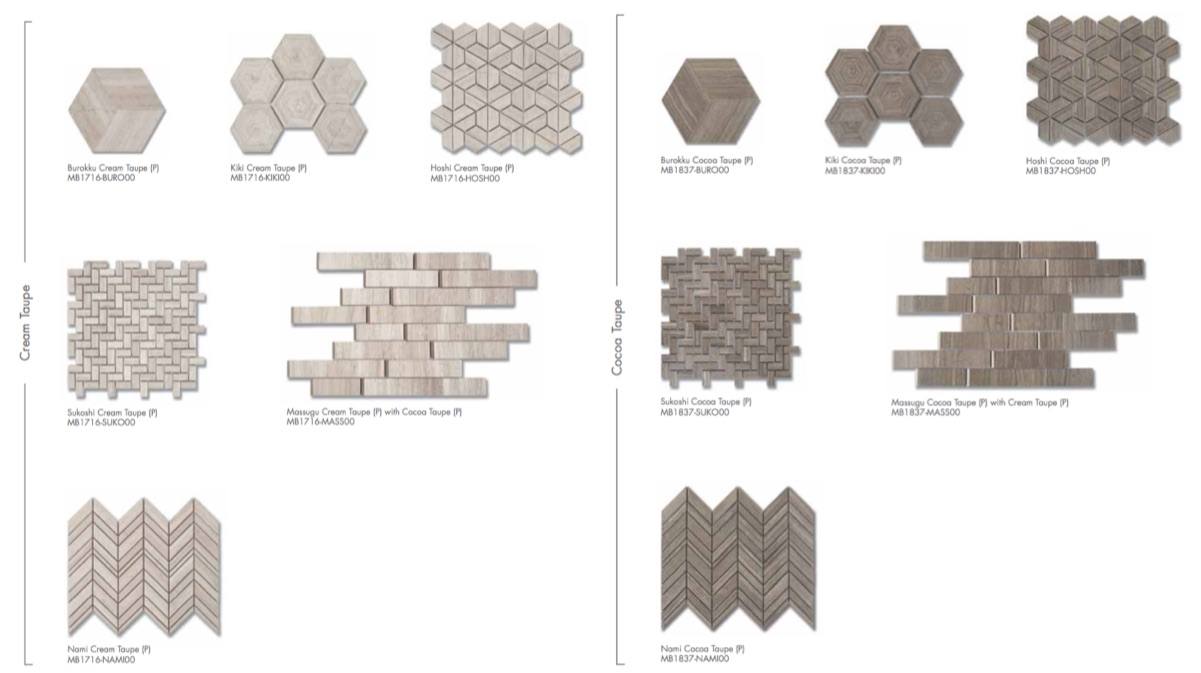 Installations and Inspirations with Origami: 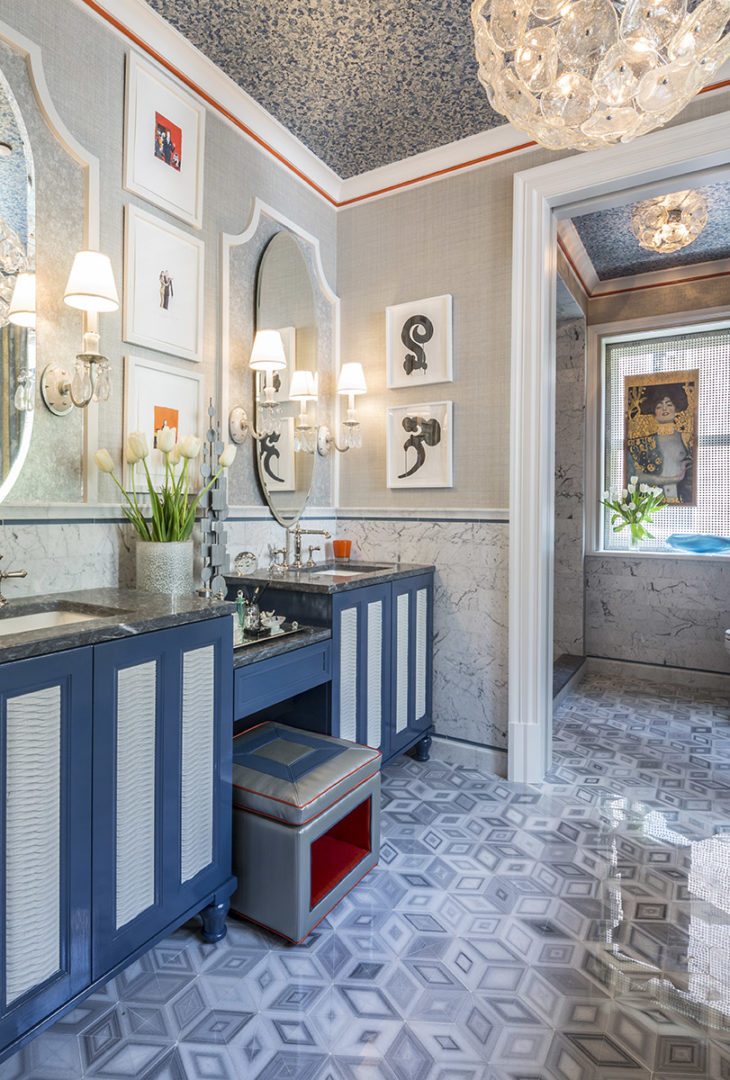 Photos in this post are by Marco Ricca, courtesy of AKDO.